This site doesn't support Internet Explorer. Please use a modern browser like Chrome, Firefox or Edge.

Currency is usually the one thing we never have enough of

Currency is interesting because it usually gives a pictorial insight into a country and its people. The denomination to its exchange value shows us the economic strength of a country.

From a darker side the residues left on the notes can attempt to show the health of a country. As an example cocaine residue on US 100 dollar bills and blood or other bodily secretions on prison camp script.

So what is it? It is the soft, flexible, paper or polymer we call folding money, bank notes or cash. It is the lifeblood of a nation and if it is weak or strong so is the economic support of the country which issues it. 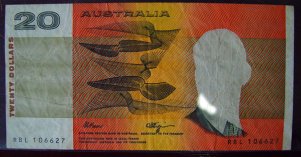 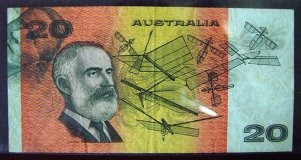 Error notes as above are also a very popular collecting field.

For the purposes of this web site on coins I want to look primarily at the issues which were used to replace coins for many and varied reasons and in which the issuing authorities backing was in coins gold or silver.

I will also include some that picture coins on them and perhaps some with special historical interest.

Script which is a term which means a promise of value is an interesting area particularly from its usage in prison camps where money was strictly forbidden and did not circulate in the general population.

This is a very interesting series for collecting because of its history and poor survival rate.Broken bank notes, or shin plasters as they became know are also an interesting look at the historical development of the national bank note system of the USA.

For those of you who do not know when your skin becomes broken on your shin (the bone down the leg below your knee), you can often stop the bleeding by sticking a piece of thin paper to it.

When the paper notes became so worthless as money its only use was for stopping blood from a man’s shin when injured. Thus the broken bank notes became known as shin plasters.

Confederate, Not geld, Overprinted, and Military script which is for use of military troops as currency within there compounds and with each other will also be addressed as time permits.

The only thing you won’t find information on here is information about current issues of any country.

Enjoy this page? Please pay it forward. Here's how...

© Copyright 1968 All Rights Reserved by www.topcoins.com

No Reproduction Permitted Without Permission